Build a playground in Dunkirk, France

Assembling the side of a self-build refugee shelter construction

“When I first heard about the Calais jungle and all these people living in tents last September, I recall one of my first thoughts being, how on earth are these people going to live through the winter? They’ll freeze themselves to death.

Six months ago I undertook a reckless mission with CamCRAG to help the refugees in the Jungle camp in Calais, not knowing what to expect, or even what I’d end up doing. Arriving there, and being of a practical bent with tools and wood, I dedicated myself to building shelters, which I concentrated on for a few of my subsequent visits.

After spending most of that first Sunday constructing just one double shelter, I visited it every month, and tried to ensure that it was still OK, and that the residents were managing. A couple of weeks ago it was destroyed during the French authorities annihilation of the southern half, and the subsequent, arbitrary (thankfully) preservation of the northern zone (possibly motivated by the hunger strike undertaken by 12 Iranian refugees and briefly some British volunteers). 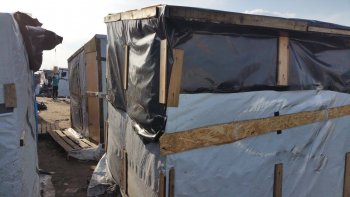 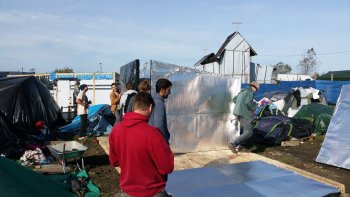 My effort was tiny compared to the long term volunteers, who managed to build way over 1000 shelters in total, and hopefully avoided many deaths.”